Introduction
In the first blog in this series the SAP SOA Reference Architecture has been mapped onto the CORA model. In this blog CORA has been used to asses the ‘SAP Business Suite’, regarding separation of responsibilities, decoupling, re-usability, portability and substitutability of elements, by plotting the different SAP-components onto the CORA layers and elements. This is called the ‘SAP platform decomposition’.

Platform decomposition of SAP CRM and SAP ERP
In this example an organization wants to use SAP CRM en SAP ERP to standardize their processes and data. Both platforms will be implemented using the N-tier architecture style. First the Logical architecture is shown presenting the logical elements needed. 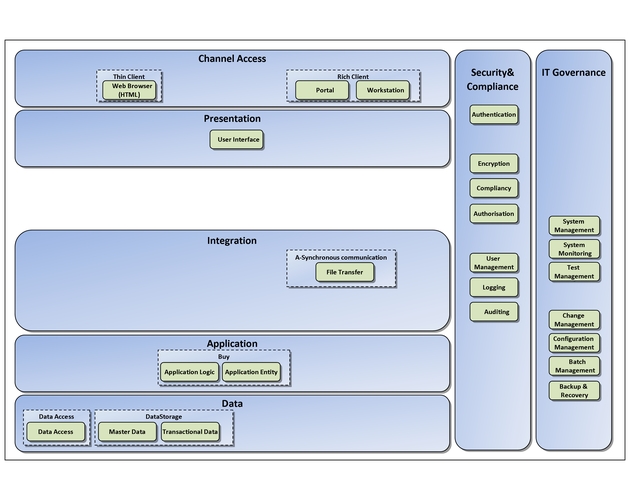 Next, the physical architecture is described, showing the SAP components viewed on top of the logical TI architecture. The integration between the software components elements is also shown (with the red lines) which represent the contracts between these components.

This overlap and ‘wrong’ positioning of components can not only lead to connectivity problems with other technologies but will also make re-use laborious and runs the possibility of causing serious governance issues with regard to determining when to use what component and which resources to use when implementing these components.

By using the CORA to position pre-delivered components logically, expected possibilities and usage regarding these components can be assessed carefully.

In the next blog post a SAP platform decomposition is described using a combination of N-tier and SOA architecture style.